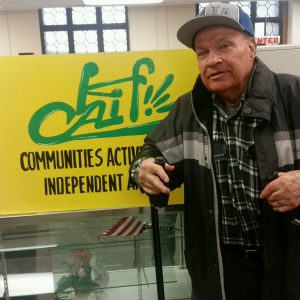 Darryl Eversole grew up in the Pittsburgh area where his love of the Pittsburgh Pirates grew and so did radio. Lived in an area called the Hill District. Darryl began his career in radio as a high school junior and senior in the 1960s in a radio show playing rhythm and blues and Doo-Wop, as well as classic rock and roll. After high school, he traveled the country working at small to medium sized radio markets and landed in Los Angeles in the late 1970s working in several radio stations. One radio program through KRLA focused on the disabled community in the early 2000s.

Darryl began his advocacy of the issues facing the disabled community during the 1960s when he saw the injustices, discrimination and civil rights issues being violated for himself and the people he would love and defend.

Currently Darryl is a Board member of CALIF since 2015 as a bylaws chair. His commitment is to make sure the Americans with Disabilities Act is enforced.

His radio show, “Classic Soul,” can be heard 6:00-10:00am, Monday-Saturday and Sundays, 11:00pm-Midnight, through another show called “The Doo-Wop Hour,” as well as Monday-Thursday 9:00pm-Midnight through Tunein Radio.