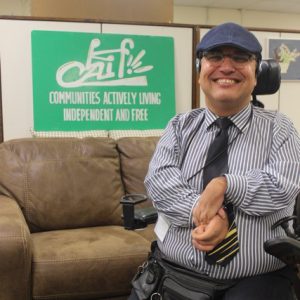 Born Jose Fernando Roldan Velez, he was born in Cucuta, Department of North Santander, Colombia with arthrogryposis multiplex congenita and uses a power wheelchair to get around. But being born with AMC made his parents, Jose and Maria, almost lose hope because Fernando was born premature and was close to death. However, his parents are strong Catholics and never gave up and were determined to give him a good education and a bright future.

In 1977, his parents emigrated from Colombia along with their other son Cesar Augusto Federico Roldan Velez to the United States. Fernando was raised and still lives most of his life in Glendale. He did most of his schooling in Glendale where he began at Columbus Elementary, then Woodrow Wilson Junior High School and finally graduating from Herbert Hoover High School in 1991. He graduated in 1996 from Glendale Community College with an Associate’s of Arts degree in mass communications and later in 1999 with a Bachelor’s of Arts in journalism from California State University Northridge.

Fernando began on August 6, 1999 to work for the State of California Employment Development Department in Canoga Park. Later he was moved to the Pacoima EDD office in 2000. He then transferred to the Crenshaw EDD office in May 2002 and has worked ever since.

Fernando began his career with CALIF in 2002. He is now President of the organization since July 2009. He likes to volunteer for the grassroots radio station KPFK and is a confirmation/Life Teen Teacher at his church Holy Family Catholic Church. His goal is always to help people, especially in the disability community. Among his hobbies are watching movies and sports, as well as going to the beach, dancing and museums.