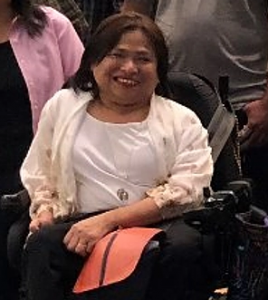 Lillibeth Navarro, who considers herself a person with severe disabilities from the onset of polio as a baby, has made her indelible mark as a spiritual mentor, advocate, activist, speaker, writer, peer counselor, local and state commissioner both in the Philippines and the United States.  In the Philippines she led a youth group of the Focolare Movement and her life story was published in the Philippines’ New City Magazine in the 80’s, and in Citta Nuova, the European Magazine of the Focolare Movement in the 90’s. She spoke before crowds of hundreds during the annual Mariapolis gatherings and in her hometown, she started the Bahay Buhay Project, a collaborative center for the disabled between the Rotary Clubs and the Ministry of Social Services and Development.

Through the Rotary International, Lillibeth Navarro got a Fellowship to study Print Journalism in the United States.  Through her resourcefulness and industry, Lillibeth completed her BA in Print Journalism and her MA in Public Relations.  She met the Disability Rights Movement in Los Angeles and established a reputation as a powerful speaker, an excellent community builder and organizer.  She became recognized as a pioneer of the Disability Rights Movement when she led the Southern California effort to push for access to public transportation and the Americans with Disabilities Act of 1990, getting arrested and suffering deprivation during the 8 years of struggle.

Along with this vocation to make it better for the disabled community, she was also involved in the pro-life struggle, speaking at conferences and making legislative visits to stop the tide of euthanasia and abortion. To her credit and advocacy, many attempts to legalize euthanasia in California have been thwarted.

Lillibeth is also considered a current hero in the US Labor movement, particularly by the SEIU 6434, the Union of Home Care Workers because she led the Disability Community to support the homecare workers’ rights to fair wages and benefits. In fact, until she started campaigning for them, there was a resistance in the disability community to support the homecare workers out of fear of worker strikes. She also is a friend of Service Employees International Union (SEIU) Local 1877 in Los Angeles as she supported their campaign for higher wages and benefits until they won their campaign late in 1997.

There is still so much more to this lady: her co-founding of the Personal Assistance Services Council (PASC), now totally an autonomous organization.  In 2001, she founded Communities Actively Living Independent & Free (CALIF), both organizations are currently serving thousands in the City and County of Los Angeles.

In December 2010, she was given recognition by Philippine President Benigno Aquino, III at the Malacañan Palace, Philippines as one of the Outstanding Filipino Overseas Workers for her works and advocacy to the disabled community here in the USA and in the Philippines.

Lillibeth Navarro, Founder & Executive Director of CALIF, the independent living center serving the 50 zip codes of Los Angeles currently serves on the Personal Assistance Services Council (PASC) as officer-at-large and part of the Executive Committee.  In 2009, the CA Speaker of the House, Karen Bass appointed her to the California Commission on Disability Access where she was appointed Chair of the Accessibility Enhancement Committee. Her appointment was confirmed by Assembly Speaker John Perez in January 2011.